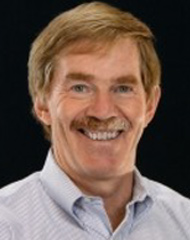 Dana Anderson is co-founder and the former CEO of ColdQuanta. Currently he serves as Chief Technology Officer and is a member on the Board of Directors. In addition, Dana is a Fellow of the JILA Institute, and a Professor in the Departments of Physics as well as the Department of Electrical Engineering at the University of Colorado, Boulder. He serves on the Steering Committee of the Quantum Economic Development Consortium (QED-C). Dana’s received his doctoral training in quantum optics at the University of Arizona and specialized in ring laser gyroscopes. At the University of Colorado his research focused on optical neural networks and inertial sensors. In the 1990’s his work moved into cold atom inertial sensing. He and his collaborators Professor Carl Wieman and Dr. Eric Cornell (2001 Nobel Laureates in Physics) first demonstrated guiding of cold atoms through hollow core optical fibers in the mid-1990’s. Dana and Dr. Cornell performed many of the earliest works guiding cold atoms on an “atom chip”, including the first demonstration of a chip-based atom Michelson interferometer. Dana’s research group demonstrated the first ultracold atom chip portable vacuum system in 2004, and he has been heavily involved in DoD-funded activities to develop ultracold atom chip systems. These system ultimately led to the technology currently aboard the International Space Station as part of NASA’s Cold Atom Laboratory mission, which recently celebrated two years of quantum matter in space. Dana is a Fellow of the Optical Society of America and the American Physical Society and he is a recipient of the R.W. Wood Prize of the Optical Society. He has been active in shaping the DoD quantum science and technology strategy by serving on a number of advisory boards and panels.

Manage Cookie Consent
To provide the best experiences, we use technologies like cookies to store and/or access device information. Consenting to these technologies will allow us to process data such as browsing behavior or unique IDs on this site. Not consenting or withdrawing consent, may adversely affect certain features and functions.
Manage options Manage services Manage vendors Read more about these purposes
View preferences
{title} {title} {title}